This first seven days of Inktober have been a blast! I’ve had some slow days and I’m a bit behind in places, but I’m just making myself use ink and trying to follow the prompts. If one of them doesn’t do it for me, I skip it since I’m making lots of other art for upcoming shows. 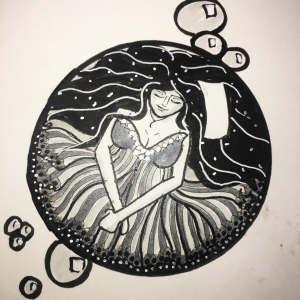 Started pretty strong and feeling confident. It’s nice to use prompts I wouldn’t normally think of on my own, and I’m particularly proud of my Bubble Witch. I realized I hadn’t messed with my Pilot Silver Marker pens in awhile, so it was fun to break them out. I’m not entirely happy with Ivy’s hand, but I plan to color it so there’s wiggle room.

I knew I wanted to do lots of Heath Ledger’s Joker this month, and so I was glad to have an excuse to put him in a peaceful situation. I’m especially proud of the loose line work and his face. Gamer, though, is just an awkward pose. I should have used myself as a model, but it was too late by the time I got started. The colors are interesting at least, but the PH Martin’s iridescent ink puddles a little as it dried.

The woman who roasts everyone. I’ve had her sketched in pencil for months but finally remembered her for this prompt. I want to color her, so she’s currently waiting for that. 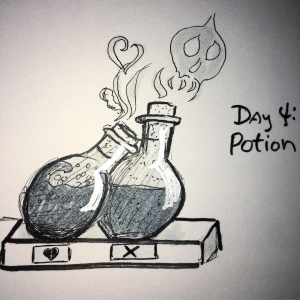 Dark Phoenix isn’t under a spell exactly (read the comics), but she is possessed by her own strength and power. What she does nay as well be magic to the onlooker. Her body and wings were so much fun, and I can’t wait to use some Coliro watercolors on her. The potion bottles were kind of a throwaway entry. I thought they’d come out cooler.

I didn’t want to draw a chicken. It’s as simple as that. I couldn’t think of a good way to make a chicken scary. So I went with a Buckethead because, well, the KFC bucket. I’m so happy with the energy in this piece too!

There’s a tendency to see Arkham Asylum from the Batman comics as practically a hotel for the rogues gallery, a revolving door they can use as they please. Yet, Arkham Asylum being games for the infamous town from HP Lovecraft’s fiction and based on Bedlam, we know there’s a darker side to it. I wanted to show that here with mouth bracers and all.

I wanted to go for energetic again, but it still looks a little stilted to me. Still, her pose and the dress rising up to the glowing crystal ball and the All Seeing Eye do draw the viewer in, so it’s pleasing to me. It’s growing on me.

That’s it so far! Are you participating in Inktober this month? How is it coming?