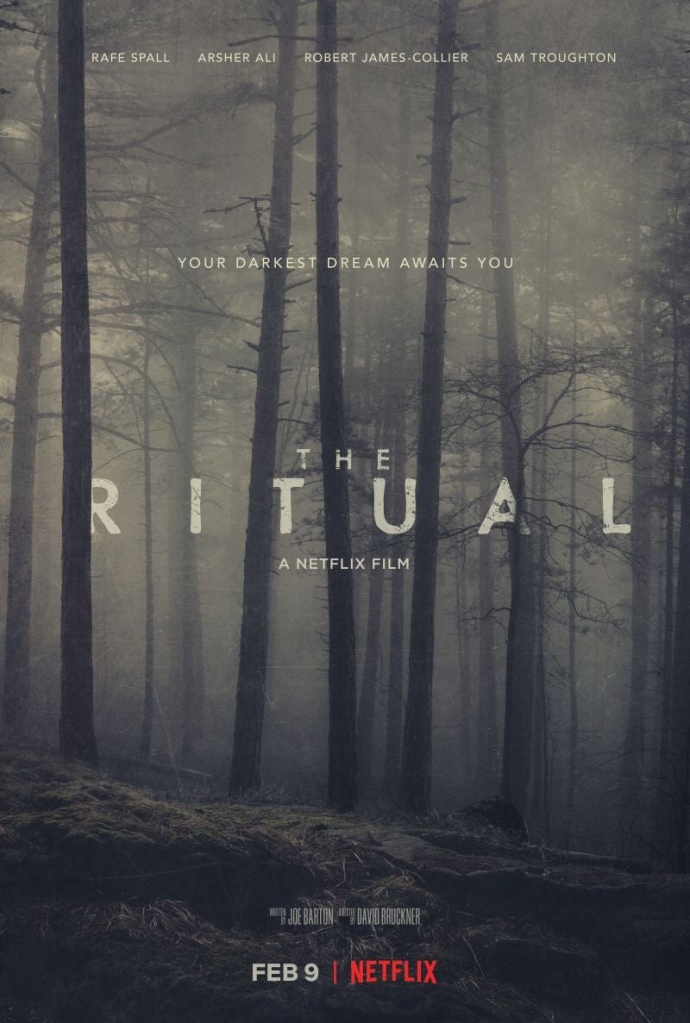 The Ritual is a tense film that begins like The Blair Witch and ends as a monster movie. This might bother some viewers, but if you go in with an open mind, it has a lot to offer. The film starts strong with a shocking scene in a convenience store, then moves to the remaining friends hiking a path from Sweden to Norway as their dead friend Rob would have wanted.

This was a film I saw recommended after watching Midsommar, and while I strongly disagree with that comparison, there are shared elements of isolation, loneliness, and buried emotions that connect the two movies.

Like some of the best lost in the forest horror, The Ritual plays on the characters’ convoluted feelings and how those buried emotions can cause a world of misunderstanding in stressful scenarios. The characters are at odds before they even set foot on their hike since they all hold mixed feelings about how Rob was beaten to death while Luke emerged from that same convenience store robbery without a scratch. Luke, suffering from survivors guilt, isn’t faring any better. This comes out when Dom injures his leg and Hutch suggests a shortcut through the forest off the trail. It’s a basic fairytale lesson that casts doom over the whole group.

It’s definitely got shades of The Wendigo by Algernon Blackwood, particularly in the scenes of camping and nightmares. On the third night, there’s a particularly Blackwood moment when one of the campers is yanked from his tent and dragged shrieking into the forest.

“It had all come about with such rapidity that, but for the evidence of the empty bed beside him, Simpson could almost have believed it to have been the memory of a nightmare carried over from sleep. He still felt the warm pressure of that vanished body against his side; there lay the twisted blankets in a heap; the very tent yet trembled with the vehemence of the impetuous departure. The strange words rang in his ears, as though he still heard them in the distance—wild language of a suddenly stricken mind. Moreover, it was not only the senses of sight and hearing that reported uncommon things to his brain, for even while the man cried and ran, he had become aware that a strange perfume, faint yet pungent, pervaded the interior of the tent. And it was at this point, it seems, brought to himself by the consciousness that his nostrils were taking this distressing odor down into his throat, that he found his courage, sprang quickly to his feet—and went out.”

The film does an admirable job of showing the conflict between the four friends. One could very easily say the trap and situation are a metaphor for the friends’ building unstated anger over their friend’s death. The ritual then is the act of going through the motions of forgiveness when their feelings are actually far more complex.

The creature? Absolutely amazing, and you can tell it’s a Lovecraftian nightmare brought to life. The offspring of Loki, it focuses of people who have experienced extreme pain and loss and offers them a choice: worship it and be free of pain while gaining long life, or die in agony.

Despite all this, the ending does feel very much like a male power fantasy where brute force and charm makes our protagonist somehow able to overpower not just an entire small town of immortals, but a Jötunn god.

The ending simply has Luke take charge by following orders: dislocating his hand, killing immortals, and running for his life. Overcoming the monster for him is simply running away from the problem — his own fear and pain. It’s what his friends accused him of early in the film when they imply he’s a coward, and we see him run from or hide when his friends are in danger over and over again. Truly, he’s only brave when punching an elderly woman and shooting an unarmed man trying to calm his down. I’m not sure that counts as bravery. Either way, his friends are all dead.

Gaudette, Emily. “What is the Monster in The Ritual? Netflix’s Horror Film Adapts Norse Mythology, Jötunn, and Loki.” Newsweek, 12 Feb. 2018.

Here are some ways to support me and what I do. I always appreciate shares, comments, follows, and likes.

Small businesses live or die by word of mouth. Sharing, following, buying from, or donating to me helps immensely.